Such a Fun Age by Kiley Reid

MY EXPERIENCE WITH THE BOOK:
I had an absolute blast while reading this book! This was the May Book Club Pick. Each week, I’ve been posting summaries + discussion questions (feel free to use them for your own book club!). At first, I thought I wouldn’t like this book. The blurb really just hints at what the first chapter is about, and I didn’t think it had much plot for me to read an entire novel for. But OH, I WAS WRONG. This has high school pettiness, woman-friendships, new adult’s coming of age (to Actual Adulthood), as well as extremely tricky themes like racism, privilege, and assumptions (+ stereotypes). Overall, this was an EXCELLENT BOOK CLUB READ, with plenty of discussion points to hash out with your friends.

CHARACTERS/DYNAMICS:
Emira: Meet Emira (or ‘Mira’ by the 3-year-old she babysits); she’s 25, she’s black, she’s unwealthy, and she’s a wallflower. She is NOT your typical sassy black woman. Emira is an excellent embodiment of what many young black Pennsylvanian women are like, but that is not the depiction we ever see in the media. Emira knows her boundaries (usually only AFTER somebody has taken advantage of her), but she is so level-headed– I wish I was as patient and as kind as her.
Alix: CRAZY, EVIL, PRIVILEGED, ICE-QUEEN. What the hell is wrong with her. Alix is 30+ years old. Her career is in writing letters (what ever the hell that means) to companies, and SOMETIMES she reviews/promotes them (????????????? The Most Privileged Job In the World). Alix has 2x children under the age of 3, so naturally, you get a nanny (???). Alix has some ‘trauma’ from high school, but she’s Totally Past That. She’s now onto obsessing over the black nanny, who she is desperate to become friends with. Alix is controlling, selfish, and so offensively ignorant (purposefully) of her over-stepping. She’s the epitome of White Feminism.
Briar: This is the 3 year old that Emira babysits. She’s simple and complex, as all toddlers are. She doesn’t really get much of an arc in the story, but she serves a purpose for Emira AND Alix’s realisations later in the novel.
Kelley: Alix’s ex-boyfriend; Emira’s current boyfriend. Does he have a fetish with black women? I don’t know, it wasn’t really explored. Kelley is purposefully constructed with little dimension, I think to prevent any overshadowing of the true purpose behind the text: the differences between Alix and Emira. Some could receive Kelley to being a bad-guy, but I found him charming and charismatic. I’m sad that he eventually lost TWO relationships due to the girlfriend(s) assuming he shared their secret.
Emira’s friends: Honestly, they’re too pushy to be people I’d like to be around. Zara helps Emira break out of her shell, but she also makes Emira feel like CRAP. It was Emira’s friends who said ‘every time she returns from work, she’s depressed.’ I honestly think that Emira also felt that way after seeing her close friends, whether it was due to jealousy, or just having a bad time (similar to the reasons Emira would feel deflated after taking care of Briar).
Alix’s friends: Alix has 3x gal-pals who live in NYC. They’re all pretty successful, rich, and have young children. They completely support Alix through all of her dramas, but I think the danger of their unfailing support was: they never questioned Alix. They always just blew her up. They NEVER could ever see her as acting on ill-intent. I think that’s dangerous for friendships, and it’s even more deranged with a group of women in their mid-thirties.
Alix’s husband (Peter): Similar to Kelley, Peter is not given much character development or dimensionality at all. He’s a local morning-news host. He has a large penis (yes, that’s serious something that is mentioned TWICE in the novel, and not much else about him. Is this reversing how in most adult-novels, women are barely mentioned, and when they are, it’s sexualised? It’s always about their sexual qualities?). My book club and I were constantly frustrated for Peter’s lack of parenting responsibilities. WHY DID ALIX HAVE TO HIRE A NANNY? PETER FINISHES WORK BY 10AM EVERY DAY. WHAT WAS HE DOING? WHY COULDN’T HE TAKE CARE OF THE 2X CHILDREN UNDER THE AGE OF 3?
Laney: A minor character is Laney, Peter’s cohost. She’s super pretty, and thin, and blonde, and polite. Alix hates her. Emira… actually doesn’t mind her. At all. In fact, she’s completely normal. Laney serves as a great splinter for Emira and Alix’s beginning of the end for their relationship.

PLOT:
A local news host says something with very complicit racist undertones. Somebody (or a group of somebodies) eggs his house at night. In distress, the husband and wife call their nanny to take their child away from the house while they talk with the police. Their nanny was out clubbing, but came anyway because 1) she needs the money, 2) she loves this child. As she entertains the child at the grocery store, a middle-aged woman reports her to the mall cop. She believes the child has been kidnapped (?????????). Somebody (who later ends up being the nanny’s boyf) films the incident. That video-taking boy and the nanny hit it off. Later, they find out that the boyfriend was actually in a relationship with the nanny’s boss back in high school. A battle between the Nanny vs the Boyfriend goes down: who will the nanny choose? Who knows best for the nanny?

STRUCTURE:
There are 28 chapters, rotating between Alix and Emira’s perspective. Some of the chapters are flashbacks from Alix’s high school past. The novel is narrated in third person.

“But she’d never say good-bye to Emira, which made it seem that Emira would never be completely free from her. For the rest of her life and for zero dollars an hour, Emira would always be Briar’s sitter.”

THIS RUINED ME. AS A TUTOR/TEACHER, I FEEL THIS PAIN. THIS KILLS ME.

THE ENDING:
As every other reviewer has mentioned: it’s an abrupt ending. But it’s not like anything is unresolved, my god. I’m not sure why people are poo-pooing it. We see how Kelley, Emira, Alix, AND BRIAR (!!!) turn out. It’s a great, sweet-and-short ending. It’s bittersweet. But so realistic and serving justice for Emira, and honestly, that’s the best thing for her (I’m being ironic: this book is all about people assuming the best for her, and not consulting her, they just tell her what she needs to do to be ‘better’).

IMPACT:
I most likely wouldn’t feel a need to reread this for the plot. Everything was a cliffhanger, but now I know the story. I don’t feel like I need to reread those cliff hangers. Reid’s writing, however, is totally re-readable. It’s so soothing, I love it. It made me laugh and scowl and just… rest. I loved it. I love her writing. I look forward to any other books she may release.

BOOK CLUB RESOURCES – SUMMARIES + DISCUSSION QUESTIONS:
To have pretty visuals or just to engage with it online, see my blog: 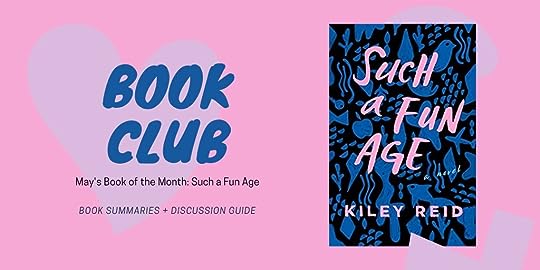