Review: Save the Date

Save the Date by Morgan Matson

MY EXPERIENCE WITH THE BOOK:
This book took me TWO WEEKS to read. Contemporary YA is certainly not a favourite of mine, nor is Matson, but I always like to give her a chance, since everybody loves her. The reason this book is not five stars is that I feel like the synopsis lied to us. The reason this book is not 1 star is that it had some absolutely beautiful 5/5 star-worthy moments in it, but it was diffused in the midst of “QuIrKy” scenes (to clarify: these were not enjoyable, quirky scenes, but a trainwreck of what we can coin as the LOL SO RANDOM phases in our lives).

CHARACTERS/DYNAMICS:
*deep breath* Well… there’s…
Charlie: meet Charlie, our 17-year-old protag. She’s absolutely fine. I had a gripe with her because everything was a disaster in her life, but it’s important to note: at the end of the day, she was returning to a rich, white family, with multiple college acceptances, and with no harsh realities hitting her in the face. She had it absolutely, god-damningly, f i n e. It made me want to strangle her. Plus, she loves to intervene. Even though she’s the baby of the family.

Mike: So Mike is the second youngest, at 19. He is best friends with 😍JeSsE FoStEr😍 (Charlie’s long-time crush). He hasn’t returned home for 1.5 years. He was sick of his mum for writing all their private moments in her comic strip (btw: was it just me who would read “her strip” or “the strip” with the added on “-joint” to the end of it??? No? Just me?). I related most to Mike in this story, and I truly don’t see the harm in any of his actions. He was trying to escape the toxicity of his family.

JJ: I immediately just think of Emmett when I read this guy. He’s great. He’s the outspoken, middle child. Also a freak math genius, but in the most jock way possible (he runs statistics for the Pirates, some baseball team idk). He was what made this book 5 stars. He’s also what made this 1 star.

Linnie: This is the 28 (I think) year old sister who’s getting married to Rodney (who’s black and a military brat). There actually wasn’t much of a focus on her at all. All Charlie cared about were her brothers. But I guess since Charlie’s mission was saving Linnie’s wedding, we can see Charlie cares in her own way. Least to say: Linnie is not Charlie’s fave sibling!

Danny: Danny, or Sheridan (lol), is the oldest, and also Charlie’s fave. He’s 29. He was Charlie’s superhero. He also sucks at being a boyfriend. But he’s a great surrogate father. I thoroughly enjoyed watching Charlie’s disillusionment of her hero unfold in this story. It reminded me of Q’s realisation in Paper Towns. This storyline was incredibly deep and thought-provoking. This certainly made the book worth 5/5 stars.

The Parents: to be frank… the Mum sucks. One of the worst mothers ever. She manipulates and commodifies her family’s life for the sake of her 25-year-old comic strip. But also– she’s irresponsible, unhelpful, and constantly out of the picture. On the other hand, the father was great. He made this book less mature for my liking, and was a pretty two-dimensional character. (view spoiler)[I’d also like to note that I totally saw their divorce. Their reveal (way too near) to the end made me tear up. I usually never with family angst. It usually seems so fake. This was not. (hide spoiler)]

Jesse Foster: This is the Chad of the story which had so much potential as a romantic lead, but it wasn’t the focus of the book, so, kk cool cool. His characterisation was wasted.

Danny’s Date: Brooke is a doctor. Brooke has hissy fits early on. Brooke suddenly does a 180 and is so kind to Charlie. Brooke is a psychologist. I’m 100% shocked that Brooke handled all of these social situations incorrectly, considering her profession. But I loved where the story leads her. I’d be interested in reading her standalone.

Bill: Bill (or, to JJ, Billiam) is the 18-year-old wedding co-ordinator (definitely realistic) who was kind of forgotten there in the middle, but made an impression at the beginning and then ending. He has the exact same character as Bill from Agatha Raisin and the Potted Gardener. 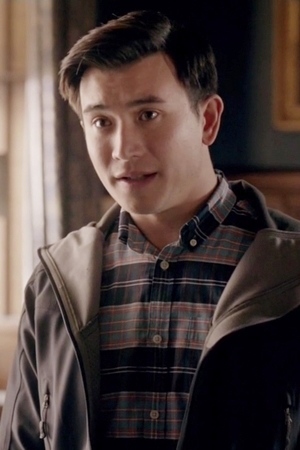 I’ve practically told the plot through my description of the characters. Basically, Linne’s getting married. It’s a shitfest. But it’s okay, because this is a stand-alone and everything has to be resolved b the end of it.

Except for one thing:

What the hell was triggering the house alarm?!? I want to know so badly.

I was expecting it to be a kids-TV plot twist, where we find it’s just been a hungry squirrel named Barry, this entire time.

But nope. There’s no answer. If somebody does know: please tell me. It’s keeping me up at night. I started to hope that the house alarm was due to “somebody calling from inside the house” and this book was actually an 80s horror flick.

But no. Nobody was strangled. I feel so deflated now.

STRUCTURE:
Boxing Day ish: Jesse Foster and Charlie almost have sex. But they don’t. Or did they? It wasn’t really made clear. We just knew that Jesse didn’t have a condom. So, harbouring a decade old crush, I totally assume Charlie just had at it. (Spoiler: there was no teen pregnancy. How unexciting).

Friday before the wedding: alarms are going off. The family is arriving home (minus Mike). Charlie is the one that always has to get the family breakfast??? The wedding co-ordinator, Clementine, was a crook. The wedding is in shambles.

Sunday: The Aftermath. GMA comes to interview them.

September: Charlie’s off to college.

THEMES:
– Family
– Very similar themes to Paper Towns: the reality of a person compared to what you build them up to be, whether it’s crushes, friends, or family members. Maybe even yourself.
– (view spoiler)[Divorce. (hide spoiler)]

THE ENDING:
The ending was a bit predictable. (view spoiler)[I knew that Charlie wasn’t going to settle for her local college, nor did I think her parents were going to stay together. (hide spoiler)] I was surprised that (view spoiler)[we never know if Charlie and Bill got together. (hide spoiler)] I’d love a sequel, where Charlie is in college. I’m pushing the movement for more New Adult reads, damnit.

IMPACT:
Hooray! This was the first time I read Morgan Matson, without skim reading, and I didn’t HATE it. I do know, now, that I can’t listen to some of my favourite booktuber’s judgement.

2 responses to “Review: Save the Date”