In Other Lands by Sarah Rees Brennan

This book was amazing. I was put off the first page, as it was suddenly so abstract and disorienting. But once you settle into the writing and the world, you come to find it’s such a soothing and well-told story. I have added this to my favourites list because I adore it so much. I will add, however, if you’re expecting mermaids, don’t read this. The mermaid realm plays little importance to the land-focused drama being told.

MY EXPERIENCE WITH THE BOOK:
I was immediately engaged with this beautiful tale. Every time I picked this book up, I felt like I was swallowed into the world and inside the kids’ camp. Similar to how you feel whenever Percy returned to Camp Half-Blood.

Albeit, I was confused with the first page. But once my imagination opened up to the idea of breaking the laws of reality, I thoroughly enjoyed the piece.

Elliot is not easy to warm up to. He was abandoned by his mother at a young age, and his father is completely checked-out for any sort of parental care. Elliot struggles to find anywhere to belong; whether it’s in the human and non-human realms. To add to the confusion, Elliot is bisexual. The defining of his sexuality isn’t complex at all; it was simply trying to navigate relationships in general that Elliot struggled with. For years he pined over Serene, his best friend (and love of his life). In later years, it was boys and girls and rebound-girls. I was surprised that Elliot and Serene had sex at such a young age (14!). I did appreciate how mature Elliot was, throughout the entire story from age 12-17. It’s refreshing for authors to depict teenagers with the same amount of complexity, while still giving them the rationale that any normal person would relate to (i.e. not making your main characters into the hero complex).

Serene was so crucial until age 14 (so only 2-3 years of this books’ lifespan, which covers ages 12-17). I was disappointed where her character leads, but in those first few years, it was phenomenal to see her as the caricature to the ridiculous logic of the patriarchy. It was absolutely gold. I hope I can find some quotes so you can all understand just how spot on her character is.

Brennan did such a great job at antagonising Luke at the beginning. I genuinely saw him as Elliot’s threat. Luke, as the clear OTP love interest for Elliot, was an excellent slow-burn romantic lead. Luke’s nature is so fragile and careful; it really made me swoon. Oh god, I’m turning into all those gushing girls from the camp. But I don’t want him for me– I saw him so perfect for Elliot. @SARAH REES BRENNAN, WHY DID WE NOT GET MORE WITH ELLIOT AND LUKE?!? I was expecting them to get together after Serene and Elliot did. But no. The slow-burn is cruel but addictive.

PLOT:
Elliot gets pulled into a magical realm. He studies there every year, like at Hogwarts, then returns to his home in the human world. Each year we see the golden trio; Elliot, Serene and Luke, grow. It was so satisfying to see. I wish each of those years were made into a single book, just like Harry Potter and the Sorcerer’s Stone and The Lightning Thief. 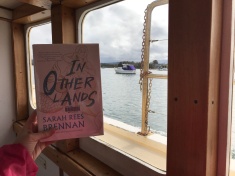 Luke’s mum, Rachel, was a great Mrs Weasley Copycat (who likes to have an open relationship with her husband). Her support and love for Elliot made me want to cry. Elliot’s had nobody his entire life. Then this surrogate-mother comes in and embraces him!!! The feels!!!

STRUCTURE:
Each year of Elliot’s life is a section of the book. This book has no chapters, simply the school years. It begins at the start of each school term and ends after his summer break. So we actually get to see what Elliot’s up to when he’s not in the Borderlands. It was perfect. I just wish each section was one entire book.

THEMES:
– Love; platonic, romantic, parental, and self.
– Belonging
– High fantasy
– Sexism; misandry and the interplays of our society’s patriarchy.

QUOTES: aka time for all of Serene’s lines

“‘The woman goes through the physically taxing and bloody experience of childbirth. A woman’s experience of blood and pain is, naturally, what makes women-kind particularly suited for the battlefield. Whereas, men are the softer sex, squeamish about blood in the main.'”

“‘Hello,’ said the beautiful elven maid. ‘I was just thinking, and I mean no offence, but—how can any fighting force crowded with the softer sex hope to prevail in battle?’
‘Huh?’ said Elliot, brilliantly. ‘The softer what?’
‘I refer to men,” said the elf girl. ‘Naturally, I was aware the Border guard admitted men, and I support men in their endeavour to prove they are equal to women, but their natures are not warlike, are they?'”

THE ENDING:
I am unsatisfied with the ending. We never truly see how Luke and Elliot will go. I wish we had less of Serene, and more of Luke for the ending!

IMPACT:
I am going to buy this book. I will fall asleep with this book by my side. I love it so much. I will be hugging it for the rest of the week. Thank you to GR Choice Awards 2017 for showing me this book. It’s a new favourite.

Read this book if you adored the Golden Trios and their schools from HP and PJO; but you needed more romance. This should hit the spot!

I see someone is on a mermaid hunt! @YABooksAreLife https://t.co/XEe1Gw7iWQ

5 replies to Review: In Other Lands