My Lady Jane by Cynthia Hand

MY EXPERIENCE WITH THE BOOK:
This is an extremely famous book in the Booktube community. For years I’ve seen it plucked out in the midst of Bookish Challenges, and wondered when I’d get to read it (my local library has never bought a copy). I finally found one in a far-away library and had a fun time reading it. It was just a bit too immature for my taste. Even though I’m (going to be) a history teacher, I’d never studied this period. 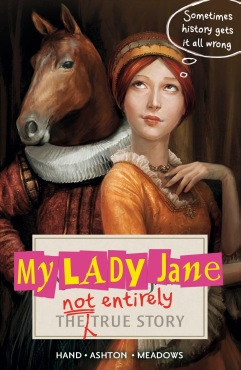 Jane: uh. She’s cool. She’s just a plain Jane. I wouldn’t say she revolutionised female protags in YA fiction. She’s fun because she shares our passion for books, but also has mediocre sass (as much as you can as a female in the 16th C). She flip-flopped a lot. I found some chapters with her were fun, but I preferred Edward’s portrayal of her than actually seeing everything through her POV.

Edward: Probably my favourite character to read in this book. He was entertaining and more modern in his thoughts, however, was still representing the times of sexism from male authorities accurately. I genuinely wished for him and Jane to get together (even though they were cousins). I found him to have such an unusual and exciting storyline, and to be frank, I found his future love interest, Gracie, not well suited for him at all.

Gifford: Look. Gifford is unique. But he’s also the reason this story fell flat to me. Let’s start with the “Call him G” thing. That… well, maybe that caused a few giggles for a younger audience, perhaps even myself when I was 13, but now… I just rolled my eyes. Of course, he has to be called ‘G’. This caused me to think of G-Eazy, another teeny-bop icon, constantly. His character is unplausible and silly, which completely disrupted the wonderful historical narrative of Edward and Jane. 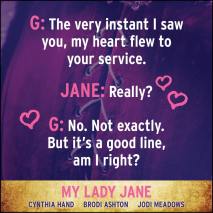 This is a retelling of the reign of Jane for nine days. Except, the conflict isn’t Catholicism vs Protestants, it’s Verities (human-ists) vs Shapeshifters. I should have known this would not be my cup of tea. I was drawn to it because it reminded me of when the tenth Doctor (David Tennant) visited the royals and found them to have werewolf genes in their family-line. This book made it a lot more “lol so random and quirky”, with too many heavy political underlines through it. The childish tone to this book completely conflicted with the bureaucratic dramas occurring. It was such a clash I felt like I was witnessing 7-year-olds go into war but they also have no concept of warfare so they kind of just make up stories about turning into animals and chasing your dreams.

THEMES:
Friendship (but on the most base level that children learn in other fables)
Marriage
Kissing cousins, I guess

THE ENDING:
Well, I was still expecting them to retell the ending of the historical event. But they didn’t. Which was nice. I have no idea if the next book will feature any of them again. It was wrapped up quite suddenly and with overly opportunistic conclusions. They fitted the rest of the tone for this book perfectly.

IMPACT:
I need to tell myself not to read anything that I would have blindly read in 2014-15 because the hype train was real and all anybody cared about was dystopian fiction, and the other genres were somewhat a specialty, so they were either thrilled or thrashed over.