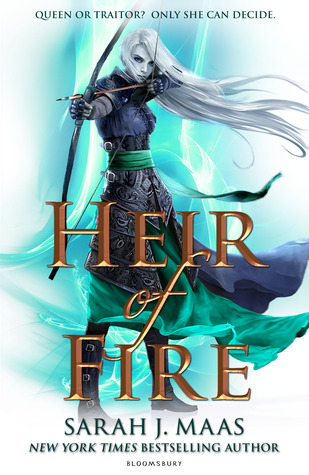 3/5 stars
Do you have any tips on how to save some money when buying books? Tell us about it!I can already hear the rest of you guys screaming “ONLY 3 STARS??? ARE YOU CRAZY?”
I want to reply, “I’m sorry, did we read the same book? How is this book so largely rated as 5/5 stars?”

This book was at such a paintstakingly long pace, I had to eventually just start skimming. A lot of the writing was unnecessary. I find this a regular issue in fantasy novels. Especially the overrated ones.
If I had to skim, why bother continuing, right?
I’m a superficial. I know, I’m sorry. The cover is so pretty. So many Goodreads users adore this series.

The first instalment was great. The writing was a little boring for me, but the concept and characters were what stuck for me.
Then the second book, I pretty much hated. I feel like not a lot happened until boom this death and this totally predictable betrayal. Romance triangle intensifies.
And then you get to this book… And it’s like. Oh remember that love triangle that was affecting Cel’s decisions??? Forget about it. It’s no longer relevant and we’re going to pretend it doesn’t exist. Remember that character who died and Cel was super upset over, even though she’d only known her for less than a year? Yeah, that’s the new driving force for all of the protag’s decisions. This is a fantasy novel, so we’re going to use a bunch of terms you don’t understand but not give any context or definition on what they are. Just roll with it. It’s a a fantasy novel, after all. The fantasy notions we do introduce? Well, we’ll half-ass explain them and after that assume you’ll be able to visualise the entire world.

It was very frustrating.
An issue I have with this series is the maps. Many readers love them! It’s a selling point of the book. For me; it’s a red flag. When a map is given at the start of the novel, it means to me;
“This story hasn’t explained the setting clearly enough, so we’ll give you this map to make it easier on the author and their team to let you try to visualise it without us developing it further.”

I’m looking at the map as I type this, and I’m honestly wondering why half of this stuff is notated. It’s not relevant to this book! Why bother having it?
I think it’s safe to say, I find difficultly enjoying his book because the setting hasn’t been properly described IMO. For me, I needed a different approach to setting this world.
Some chapters have too much or too little dialogue. I think Maas’ work would be excellently suited for a film. The action and dialogue is perfectly formatted for the medium. For a novel? Not so much. It doesn’t have that book feel to it, where I’m immersed in the characters mind. I’ve read enough reviews to see I’m not the only one who thinks Celaena is not a believable protagonist. What do I mean? Well, she’s expected to be seen as the ultimate assassin, and yet we know she either barely does anything (until ALWAYS the last 100 pages), or she suffers in whatever training she’s being induced into.
Speaking of training, bless Rowan. His complex character brought this up from a 2/5 to a 3/5 stars. I disliked him largely in the first half of this book. But if I’m being honest; I don’t think there’s anything I liked about the first half of this book. His friendship with Cel by the end of the novel was heartwarming.
Manon’s storyline was extremely uninteresting and unhelpful for the story. I really would prefer for it to be cut. If there is somebody out there who actually thought “oh boy, I can’t wait to find out more about Manon” please contact me. I have questions.

The kitchen staff was an odd addition to this storyline. I did enjoy the concept that “nobody is about labour work”. But at the same time; this didn’t do anything to how I feel about the main characters or the plot. Did it lead to further introspection of Celaena? Possibly, but not powerfully. And with a book so long, things like this need to be cut in order to be better.
So… Sorscha (did I spell that right?)… I knew from the last instalment that she’d be significant. Purely because of my previous likeness to Dorian and Cel’s history; I didn’t like her.
But I found the exact page I fell in love with her character: page 538.

“For now… she could be selfish for a little longer”.

What a beautiful introspection into her character. Her love story with Dorian is possibly more Insta-love than any other couple in this series, but I’ll excuse that for her selflessness. She reminds me a little of Sophie from The Infernal Devices.

By the end of the novel, no sufficient climax occurred. I was waiting for a throw down with Cel and Dorian, or anything about the two kingdoms crossing paths more powerfully, alas; no. On my bedside I regrettably have the following instalment, I guess I’m going to have to complete it to see if this series gets any better.

I will predict I will be unsatisfied by it, but not blaming anybody else other than I for forcing myself to go through this. I’m the one that has chosen to read through a series I’m obviously not that impressed by, for the pure reason everybody else likes it.
This novel certainly got better by the 400th page mark. But this is not acceptable when you have a 550 or so pages novel. This should’ve been cut down thus more direct to the point.
Wish me luck on the next book. I’m begging myself not to read anymore but I’m forcing myself to “enjoy” it.

PS: just a disclaimer: the writing is beautiful, at most parts. Some I wonder how it got past editing– if I submitted those lines to my high school teacher, they’d cross it out and notate a huge “????” above it. But it’s the sort of writing in which you have to enjoy a paragraph dedicated towards the colours of the grass or trees. That’s not what I want to read, damnit. If I did, I would read LOTR.